OUR VISION. The vision of Capstone Church is to lead people into a growing relationship with Jesus Christ.

OUR MISSION. Connect – We will connect with believers and non-believers. Grow – We will help others and ourselves grow in Christ.  Serve – We will use our gifts to serve Christ.

WE HAVE CRAZY FAITH

In order to fulfill the vision for Capstone Church, we will set crazy goals, and watch God do the impossible.

We will give aggressively and unselfishly to the work of God in our city and abroad.

We will spend more time SERVING outside the walls of the church than inside the church walls.

WE ARE FOCUS DRIVEN

We are truly concerned about people growing in Jesus Christ. Therefore, we will not cater to personal preference in our mission to see people grow in Him.

WE ARE UNDER ONE VISION

Capstone is led by the vision God gave Pastor Curtis to lead people into a growing relationship with Jesus Christ. We will do all we can to cultivate that vision.

WE BELIEVE IN CHANGE

Everything that is alive & growing changes. Our message and mission never changes but our approach will.

WE STRIVE TO STAY ONE STEP AHEAD

We will take things that work and make them better. We don’t wait until something is broken to fix it.

We are future driven. If we see change coming, it is better for us to start making shifts in that direction as opposed to waiting to move all at once.

WE WILL NOT ABANDON THE YOUNG

We don’t short-change our kids. They get our best leaders, funding and efforts. Children and students are at the forefront of everything we do. We don’t give them our left-overs, they get our very best.

We will speak life over every guest, no matter their background.

WE WILL KEEP THINGS SIMPLE

We are not trying to be spiritually complicated, we are trying to connect.

We will strive to give honor to every person we come into contact with regardless of their background.

What denomination are you affiliated with?

Capstone Church is a non-denominational church.

What kind of clothes do I have to wear?

At Capstone Church, we believe in coming as you are.

What are your beliefs?

We believe the Bible, the whole 66 Books.

Is Capstone under section 501 (c) (3) of the Internal Revenue Code?

What can I expect when I arrive to service?

You can expect energetic fellowship and worship—and a life changing Word from God.

What is your worship style?

Our worship style is more of a mixture of Charismatic and Contemporary.

What can my children expect?

Your children can expect to learn about Jesus and have fun as well.

What version of the Bible do you use?

Although Pastor Curtis mainly teaches from the New International Version, he also uses other versions as well. 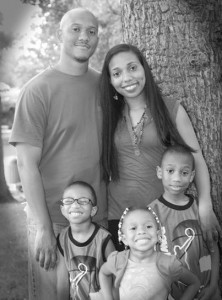 Pastor Curtis was born in Shelby, NC. He was raised in Mooresboro, NC. After the death of his mother, at the age of 10, Curtis felt as if there was no hope left for him. Shortly after that, he moved in with his grandparents, but the feelings of hopelessness and bitterness towards the Lord were still heavy on his heart. Curtis was looking for something to fill the void in his life, so he turned to the streets looking for love and anything else, he thought would and could fill that void. And if life had not already been hard enough for this young man, his father was murdered when he was seventeen—another event in his life that only added to the feelings of hopelessness. Finally, when Curtis was in the 12th grade, he dropped out of high school and pretty much gave up on life.

One night, in a dream, Curtis had an encounter with God and it changed his life forever. He started attending Christ for the Nations church in Shelby, NC. Through the love of God and his church family, the teaching of the uncompromised Word of God, things started falling into place for this young man. He found hope, unconditional love and the support he desperately needed to make the necessary changes in his life. He went to Isothermal Community College and received his High School diploma. Then he attended Oral Roberts University and received his BA in Church Ministries and a Master of Arts in Human Services Counseling with a Cognate in Executive Leadership from Liberty University. Pastor Curtis is now pursuing a Doctorate in Organizational Leadership from Grand Canyon University. God has blessed him to share his testimony and book “Into the Darkness You Shine” on several national television stations.

Want to help support the Capstone Way?     GIVE